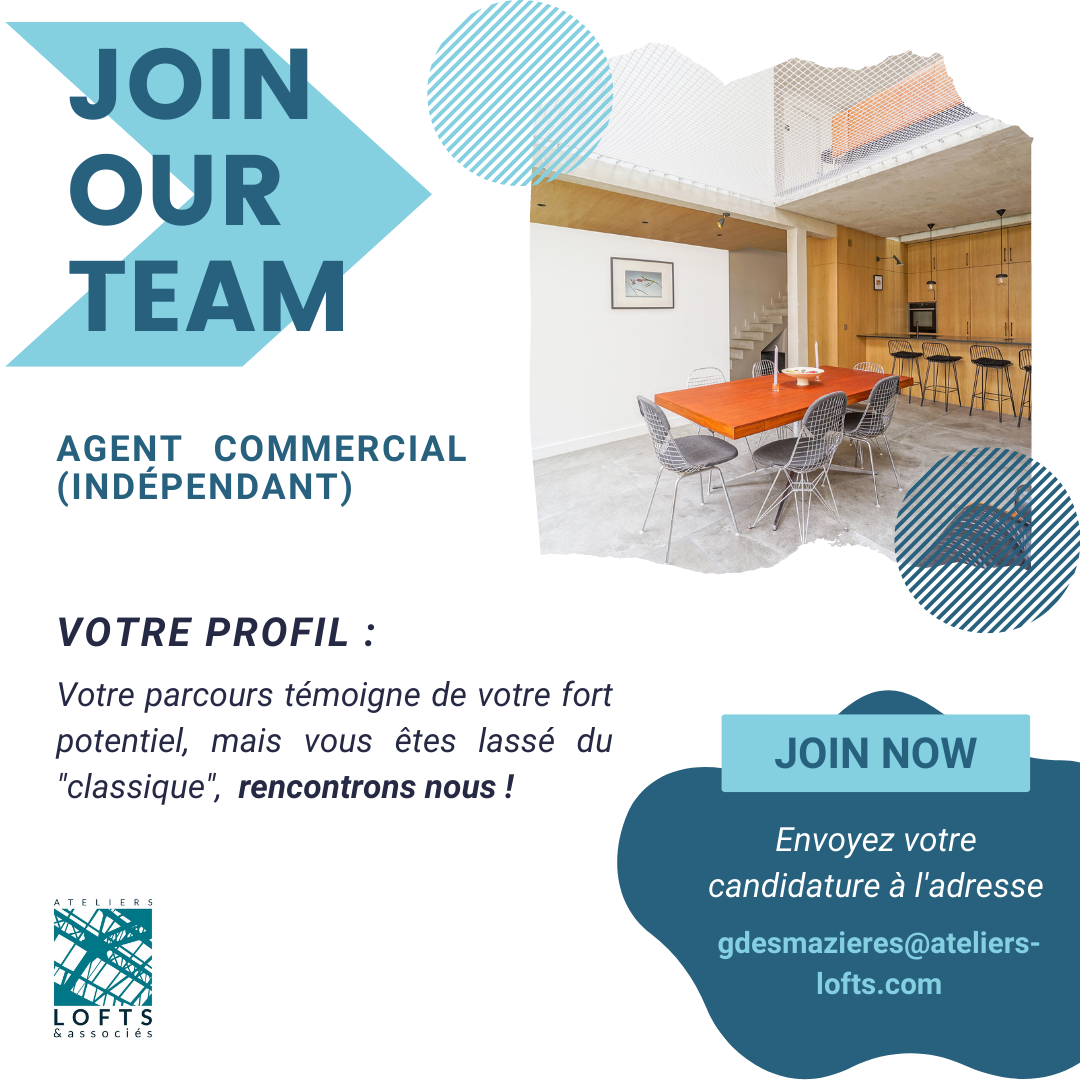 Every week, our Parisian agency shares with you its latest previews, its good plans, its news and lets you discover remarkable architectures from all over the world.
Go to the CONTACT section and leave your contact details with the subject Newsletter.

REGISTER
Where you want to live ?

Discover our properties for sale

Loft in a former warehouse rehabilitated by architect

Located in the heart of the island, on the second floor of a condominium of Lofteurs, this Loft with a very pure spirit has been revisited and optimized by its owner with the precious help of an inspired architect. It develops a living space of 99m2. In a very "POP" atmosphere, it offers a generous living room of 50m2 including an open kitchen (Leicht brand) equipped with a central island facing South-West/North-West with a double height living room, a separate toilet, a storage room, a shower room and a dressing room. The second level, accessible by a design staircase, offers the night space composed of two bedrooms with storage. Widely glazed, this Loft offers beautiful volumes as well as a very beautiful luminosity by its exposure. Contact Laurent at 06 86 84 17 21 for more information.
Arcueil
99m2
665 600 € 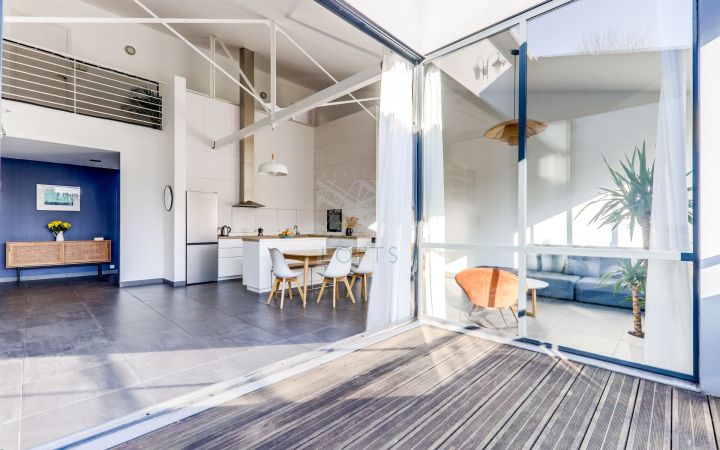 Maison Loft avec terrasse
In the heart of a small and well kept condominium of "Lofteurs", to be lived like a house thanks to its direct access on the street, this Loft has been successfully transformed. Developing a total surface of 175,17m2, it includes a spectacular main room of nearly 65m² in double height, largely glazed, bathed in light and opening on a terrace exposed South East. On the same level, a corridor distributes a bathroom and the master bedroom. Upstairs, 2 children's bedrooms and an office occupy the space. A parking space completes this rare set. Nearby transportation, schools and shops. Carrez surface : 172,44m2 For more information contact Laurent at 06 86 84 17 21
Vitry-sur-Seine
175m2
849 000 € 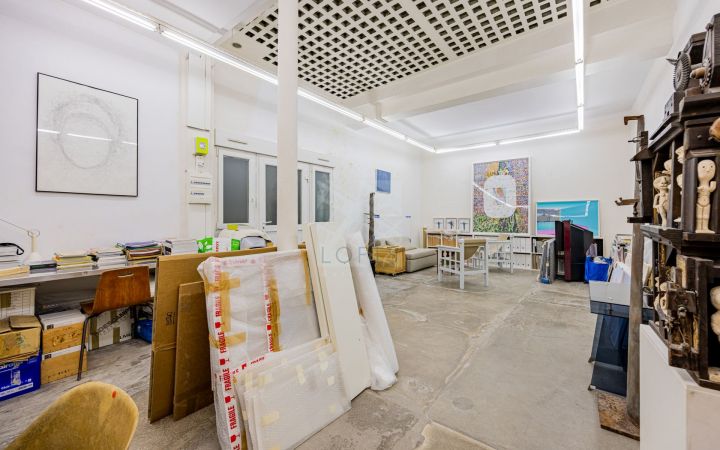 Loft dans une ancienne galerie d'art
Located in the heart of the historic district of the Haut Marais, in a building dating from the end of the 19th century, this first floor loft, easily accessible from the entrance of the condominium, has been rehabilitated by its owner into an art gallery. It offers a surface of 44,45m² Carrez. This cocoon is composed of a living room with a surface area of 40m2 and a second room including a toilet and a mini-kitchen which can be converted into a shower room if necessary. The light, mainly zenithal, comes from the roof, formed by a large rectangle composed of multiple circular glass blocks. Workshop status Proximity to Metro Line 3 "Arts & Métiers For more information please contact Laurent at 06 86 84 17 21
Paris 3 ème
44m2
499 000 € 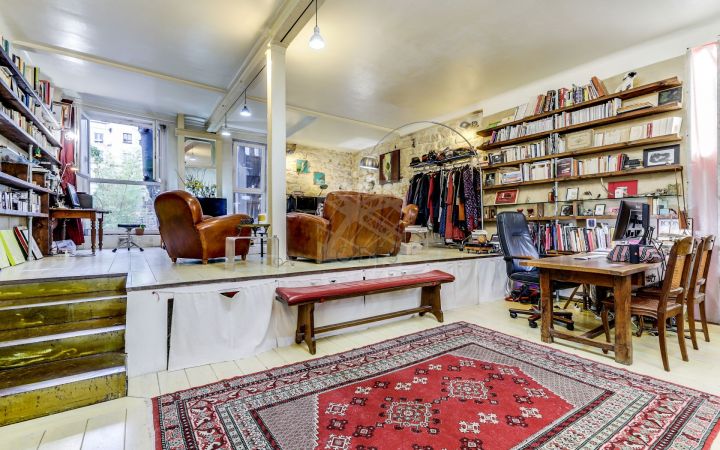 Loft spacieux en plein coeur de Belleville
Located in the heart of the charming Belleville district, between the Buttes Chaumont park and the Belleville park, this spacious loft of 119m2 on the ground offers a very large living room of 83m2 and 2 bedrooms, one of which is a mezzanine of 18m2. Bathroom. The large room finds its balance with on one hand the open kitchen and the dining area and on the other hand, in elevation, the living room. Beautiful high ceiling of 3.40 m giving a real identity of loft, in the heart of this animated and sought-after district of Belleville. A cellar of 6,30 m2 completes the property. 119,68m2 on the ground - 99,35m2 Carrez - Living room 83,84m2 - HSP 3,40m - 2 bedrooms - Mezzanine. At 5' from Belleville and Pyrenees metros. For more information please contact Laurent at 06 86 84 17 21
Paris 20 ème
120m2
795 000 €

Loft avec terrasse en plein coeur du Vésinet
Ideally located in the heart of Le Vésinet, this ground floor loft of 123 m2 Carrez resulting from the successful transformation of a former dance school, will enthuse you by its volumes and its light. The independent entrance and the terrace give moreover to this place a house spirit. The large living room with cathedral ceiling of 58m2 integrates a vast custom kitchen with stone worktop and high-end equipment. Beautiful light complemented by the 3 skylights with automated anti-UV shutters. Access on the same level to the exterior of 39m2 totally fitted out in wood and integrating a beautiful terrace with trees and vegetation. Two bedrooms on the street with shower room with large shower and bathtub nearby and a laundry room on one side, and on the other side, a master suite with zenithal light, dressing room and private shower room with Italian shower. The total renovation of the place is very recent and of beautiful quality, thought in the smallest details with many arrangements. Central location, 2 mn walk from the church square and its shops, 6 mn walk from the RER Le Vésinet Centre and near all schools. 122,66 m2 Carrez - Independent entrance - Bike shelter - 5 rooms - 3 bedrooms - Terrace with trees - Cellar For any further information or for a visit, you can contact Arnaud at 06 11 79 81 90.
Le Vésinet
123m2
1 250 000 €
See all properties for sale
scroll down

For the lucky ones, vacations and weekends in the mountains are coming soon!

According to www. travelski.com here is the ranking of the closest ski resorts from Bordeaux.

Saint-Lary, Cauterets, Gourette, find the top 10 in this video.

For the most loyal to Bordeaux, find until February 13, 2023, the prototype of gondola, Quai Richelieu (opposite the Eco-citizen house).

Horizon 2028, this project in the areas, has the ambition to connect the two banks in less than 10 min!

" Intended to better connect the 2 banks and facilitate travel, the gondolas will be a daily, practical and fast transport solution by 2028, in a rapidly expanding sector... " according to www.bordeaux-metropole.fr

THE CANFRANC TRAIN STATION IN A 5 STAR PALACE

In our 82nd Newsletter, we presented the Canfranc train station, located at an altitude of 1,200 meters and a true masterpiece of industrial architecture of 200,000 m2, in the heart of the Pyrenees. This "Titanic of the mountains", 241 meters long, with 150 access doors and more than 350 windows, is the work of the engineer from Alicante, Fernando Ramirez Dampierre, who wanted to connect France and Canfranc (junction between Pau and Zaragoza). Despite a complex and hostile environment (avalanches and landslides), it was inaugurated in 1928, but unfortunately, this station of impressive dimensions (as large as the Gare Saint-Lazare in Paris), a real construction feat, never met with the expected success and closed in 1970. 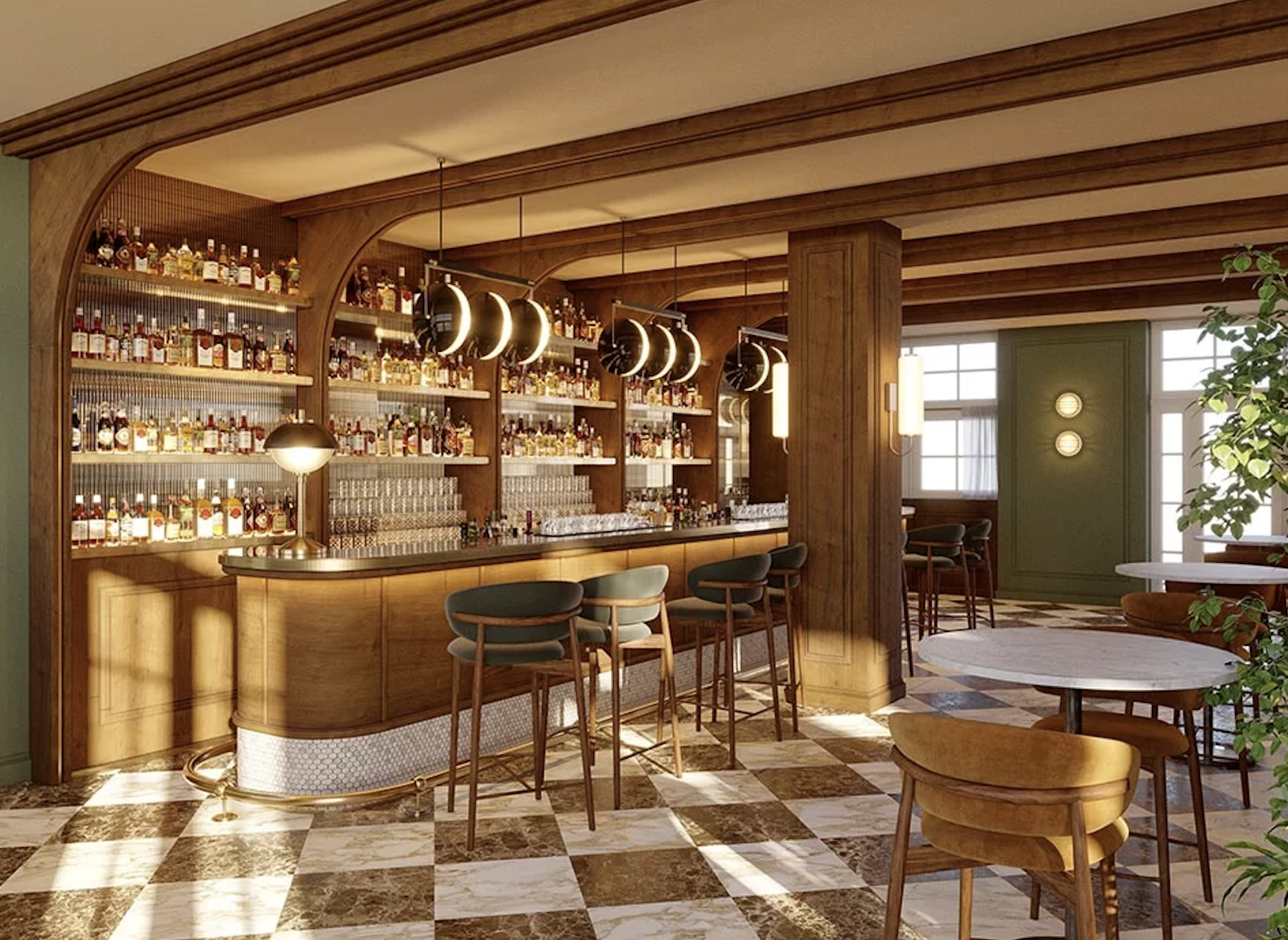 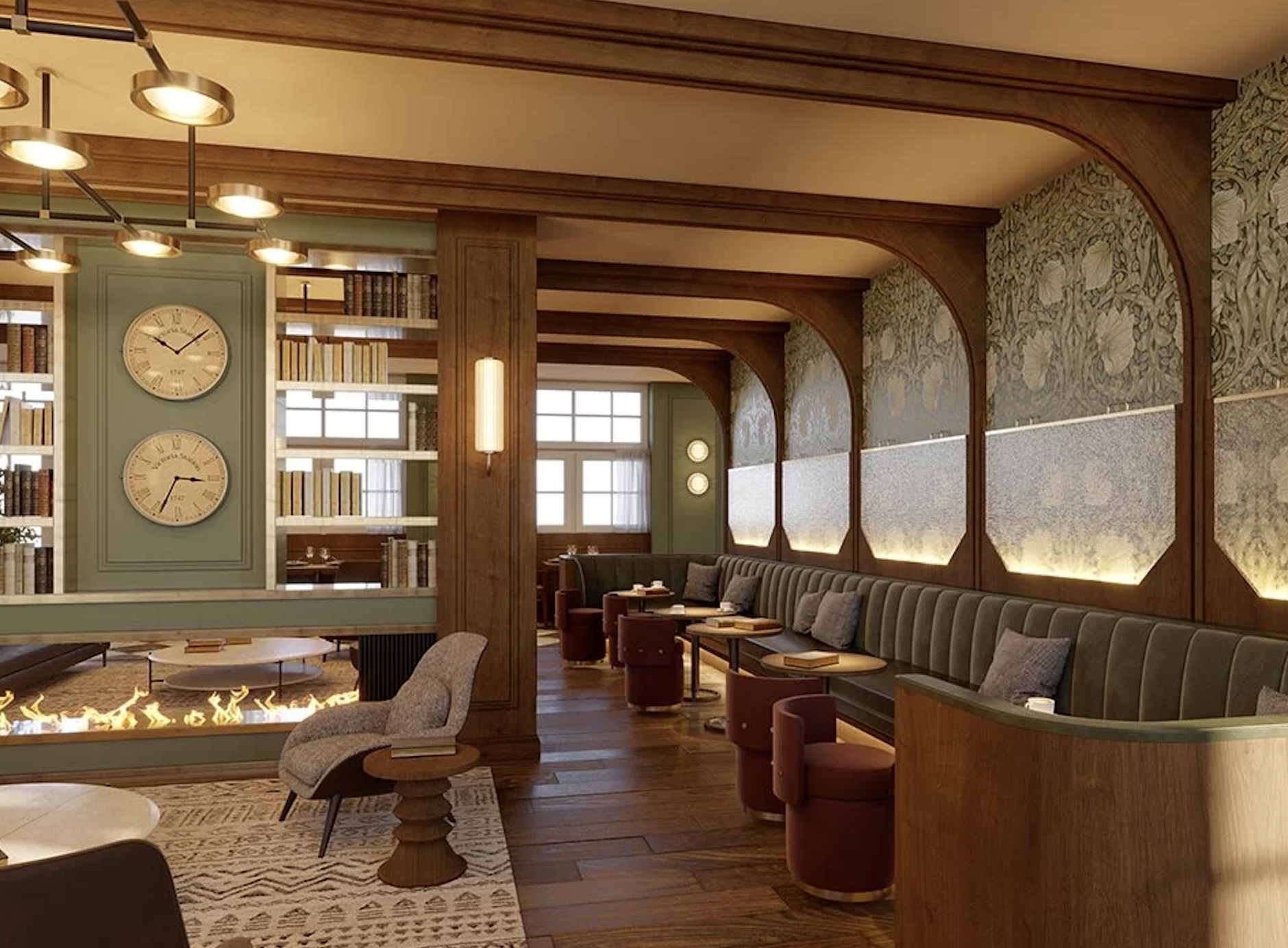 But the story does not end there. At first, a reopening of the Pau-Canfranc-Saragossa line is launched, accompanied by a complete renovation of the station, wishing to become the place impossible to circumvent of Pyrenean tourism. It will be inaugurated on April 15, 2021. A second renovation project is initiated in 2020, aiming to transform part of the station into a 5-star luxury hotel, in an Art Deco style. This crazy and ambitious project initiated by the Ingennus Agency, shows a real will to pay tribute to this unique place, to its so particular history. In our previous newsletter, we presented the inspirations and construction elements present in this hotel, with an opening date set for the end of 2022.

It is now time for us to tell you about the end of this project. This palace will belong to the Barceló hotel group (second largest hotel group in Spain), under its premium brand Royal Hideaway Hotels & Resorts. The objective was to maintain the cachet and cultural heritage of the place while bringing a wave of modernity of high quality. The hotel will have 104 rooms, including 4 suites, with two carriages converted into a restaurant in 20th century style. The Barceló Group has reached an agreement with the duo of chefs Eduardo Salanova and Ana Acin, experts in Aragonese cuisine, to take charge of the hotel's gastronomic pole. The architecture and interior design were entrusted to the interior design studio Ilmiodesign. The hotel group stated in a press release that "the aesthetics of the old train stations and the luxurious long-distance trains of the early 20th century, with their private carriagescentury with its private carriages and representative elements, but adapting it to its characteristic style and bringing a contemporary touch". 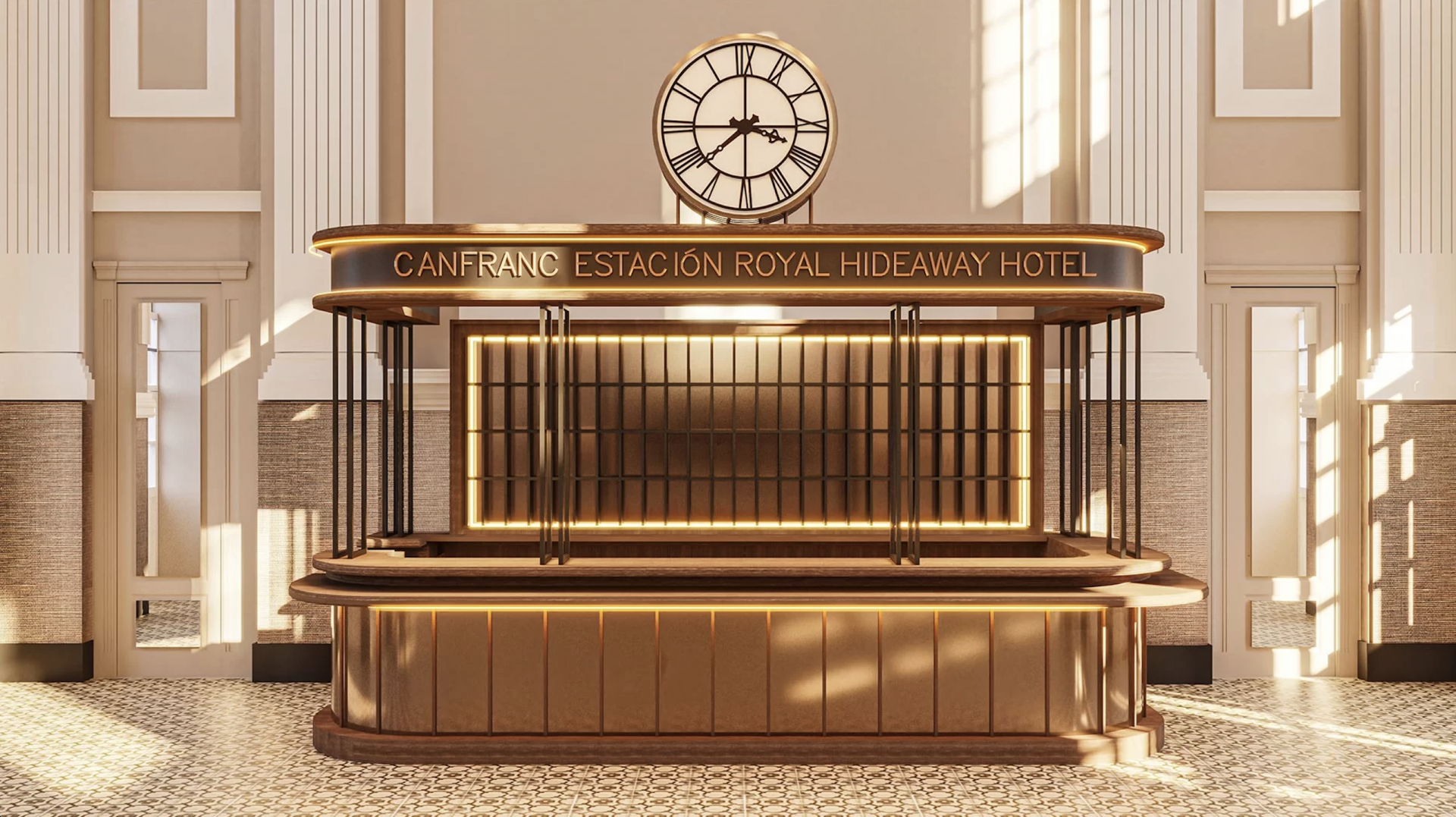 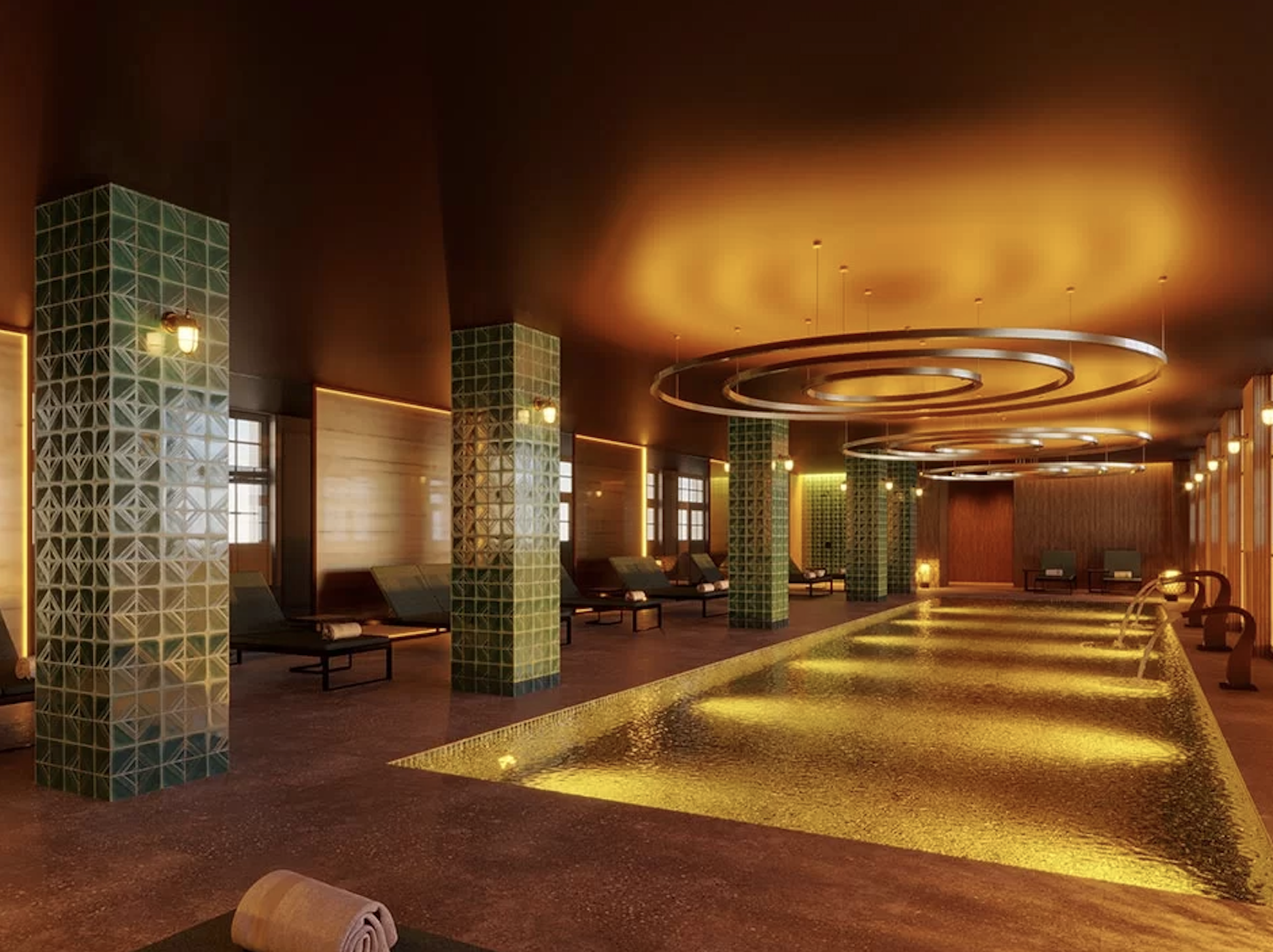 The hotel aims to become a major attraction for luxury tourism in the region. Its inauguration is scheduled for January 24, 2023.

Ciboure, a small seaside resort on the Atlantic Ocean, formerly known for its fishing port, is today known for its gastronomy, its mountainous landscapes, its fine sandy beaches and the authenticity of its architectural heritage.

The city is at the initiative of a renovation project, directed by the V2S Architects agency in order to transform the former covered site of the tennis club into a multi-purpose hall, with the presence of additional services made available to associations (meeting rooms, reception services). This project was awarded by the Maison de l'Architecture de Bordeaux in the category "Transforming".

The metal framework constituting the base of the old building was preserved in the creation and layout of the wood-frame annexes that encircle the hall. The visibility of the access, from the east wing, is reinforced by an extension managing the reception area. This takes the form of a wooden canopy, housing programmatic "boxes". Their thicknesses allow the square to be linked to the large central walkway, becoming the backbone of the project. The local wood frame offers an overhang that shelters the square and provides an opening to the outside through the crossing hall. This project is part of an eco-responsible approach in its construction, with the use of bio-sourced, dismountable and recyclable materials. The total surface of the project is 7150 m2 including a built surface of 930 m2.